The beginning of the Egyptian history lies on the formation of the Nile valley followed by the union of lower and upper Egypt by king Narmer and establishing the first of 31 dynasties. The glorious history of Egypt started from this point passing by amazing periods and thriving regions of popular figures pharaohs and queens like Ramses, Ahmus, Hatshepsut and more. The pharaohs left behind them unforgettable legacy and hidden treasures, and we are not only speaking of material treasures. We speak of knowledge and cultural treasures. Many of the ancient Egyptian king's items were found and displayed in the museums around the world, and some of them still hidden beneath the land of Egypt. However, any time excavation team is lunched from any country to excavate in Egypt, some new antiques, tombs or mummy must be found. One of the incredible sites these pharaohs have left behind is their underground tombs in the valley of the kings where the real art and cultural features of these amazing people and civilization are indicated. In this article we'll give detailed information about the discovered tomb and  Tutankhamun treasures that you probably heard about before. 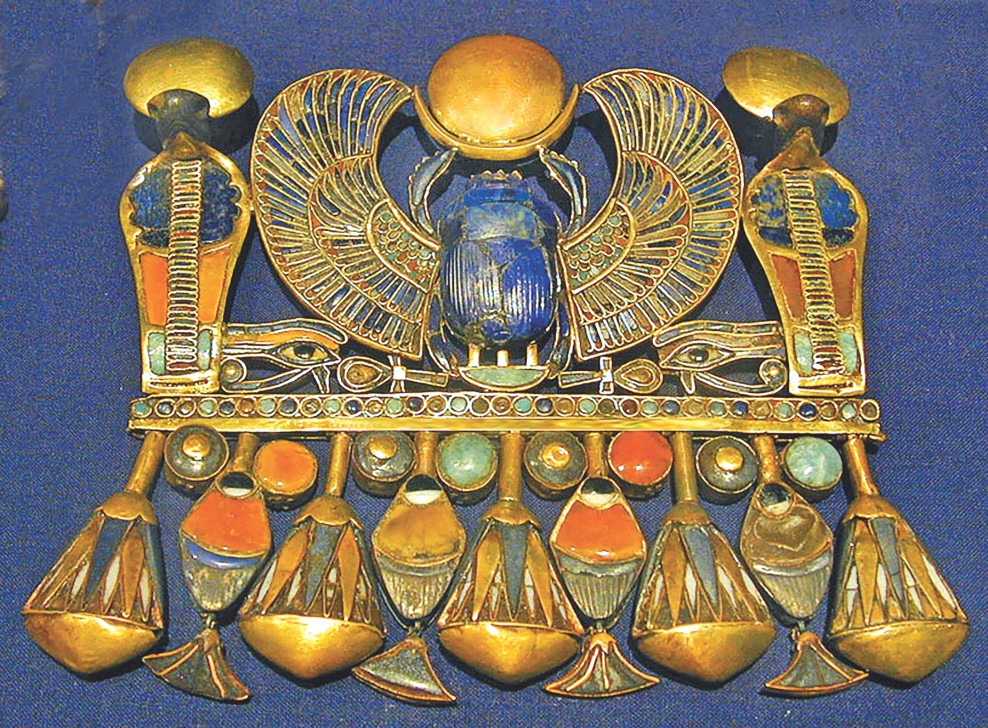 Tutankhamun known also as "king Tut" or "the boy king" became the most popular pharaoh of the 18th dynasty and in the whole new kingdom period  after Howard carter discovered his tomb at the valley of the kings (west bank Luxor), and found his unforgettable golden collection. The young boy has an interested story to be told. He died in such a young age suffering from disabilities as a result of siblings' marriage according to Egyptian traditions to keep their blood line clean. The Egyptian royal family believed that they were ascended from gods and their blood is so sacred and pure to be mixed with common people. However, some pharaohs broke the rule, and married foreigners. The young boy ruled Egypt for 10 years 1336-1327 B.C. He was born in the city of Amarna to a royal mother and father, king Akhenaton, who were worshipping god Aten and named their son after him Tutankhaten which means "the living image of god Aten". When the young boy became a king, he abandoned "Aten" and worshipped "Amun" god of the sun instead. He changed his name to Tutankhamun which means "the living image of Amun". He liked hunting and his favorite item was a golden dagger found in his tomb later along with his damaged mummy. There are many theories about the death of king Tut along with the sibling marriage theory, some said he was murdered and others assumed that he died in a battlefield which explains the damages in his body. However, the only fact approved by all is that he died young with 18 years old. 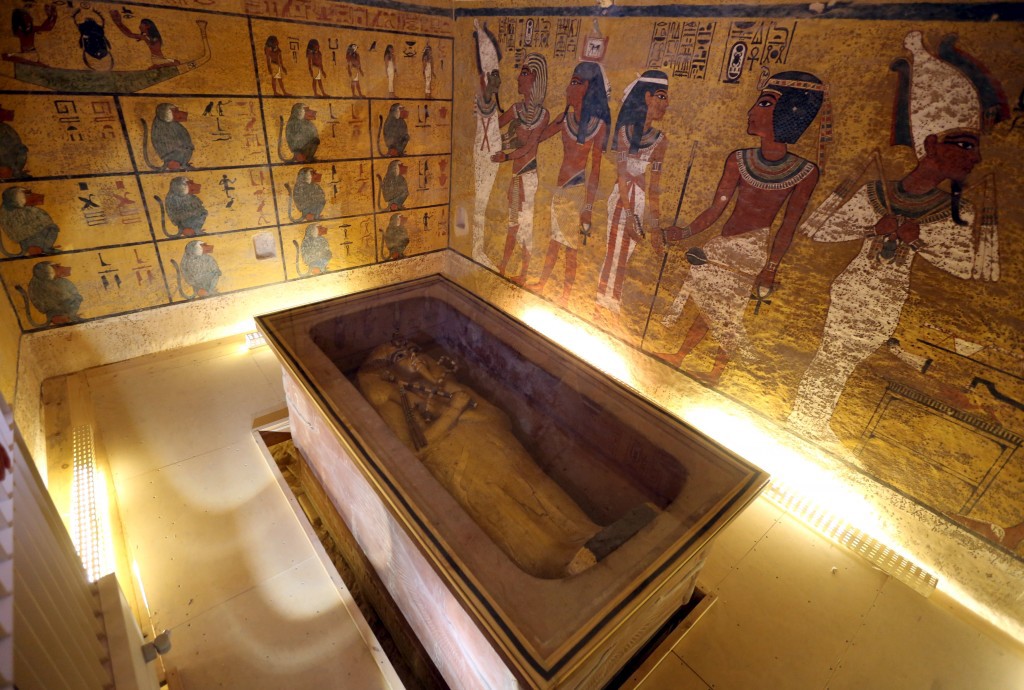 The explorer of Tutankhamun tomb is the British archaeologist Howard carter. In 1922 excavation in Thebes (Luxor now), carter was employed by lord Carnarvon to supervise the excavation team in Luxor. In November of the same year the intact tomb of Tutankhamen was discovered, and officially opened in 1923 in the presence of the Egyptologists and sciences. What was found in this tomb change the world's perspective about ancient Egypt and amazed every one. It is obvious that the tomb was not designed for a royal family member for being too small and only the burial chamber walls were painted unlike the usual royal tombs in which all their walls are painted. There is 16 steps staircase leads to the door that was sealed, yet, the tomb had been violated at least twice by robbers in antiquity. Beyond the two sealed doors comes the antechamber which was undecorated at all but contained more than 700 items. The only decorated part in the tomb is the burial chamber which led the Egyptologists to think that this tomb wasn't built for king Tut or any royal member from the first place. However, the burial room was painted with scenes of king Tutankhamun with goddess Nut and being welcomed by god Osiris to the underworld. Also, one of the walls is painted with a spell from the book of the dead. The tomb now has KV62 code in the Valley of the Kings and receives more than thousands yearly. 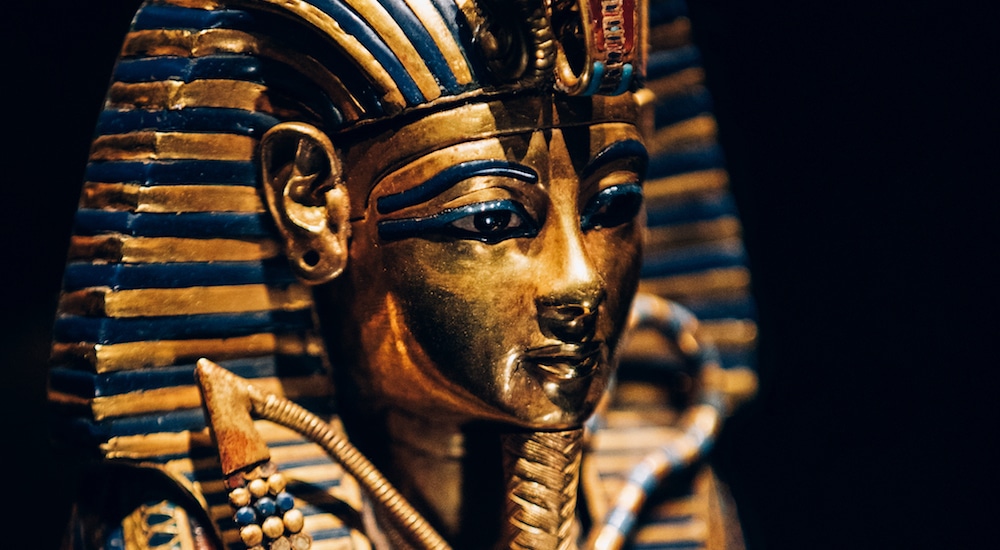 The mummy of the young boy was intact but had mere damages through the chest and the skull. The heart was missing as well unlike the usual process of mummification in which the heart is kept in funeral jar beside other funeral objects. Travel to Egypt Company included the Egyptian museum in almost every tour category, Egypt tours, Egypt budget tours and of course Cairo day tours for the visitors to see the legendary collection of the king Tut. Here are some of them:

One of the legendary items found in the tomb is the golden mask of king Tut. This item stole every ones heart with its pure gold material and bright sharp colors describing the exact face features of Tutankhamun. On the forehead of the mask there are vulture head next to copra represent Upper and Lower Egypt, and together are a symbol for unity.

The chapel is almost 2 meters high and 1.5 meters length made of wood and covered by gold. Inside the hieroglyphic inscribed and decorated chapel, four alabaster statues for Egyptian goddesses hold the internal organs of boy pharaoh mummy.

When carter discovered the tomb in the 20th century, he found the mummy inside three golden sarcophagi, and the mummy was decorated with splendid jewelries colored with vibrant schemes and shaped as Lotus, Horus eyes and vulture wings. One of his pectorals (chest jewelries) are shaped as template with goddess Nekhbet (vulture) and wadjet (copra) inside protecting Osiris.

You'll find a lot of small different statues and sculptures housed in the patterns of the museum. Some of them are images for the young king and others are for lion headed goddesses. Also, you'll find four small golden coffins containing the inner organs of the young boy mummy.

You'll find the royal chariot displayed in the Egyptian museum. It is made of gilded wood and has geometric decoration. It was used in the battlefield.

Two daggers are displayed in the museum. One with gold handle and the other with brass handle. They were the favorite possessions of the young king.

The young king liked to go on hunting, it seems like it was his favorite hobby. One of his 8th hand fans was made of ostrich's feather he hunted. Other fans have golden base with engravings for god Isis. One of the items found in the tomb was small sculpture for the boy pharaoh on a boat as he hunts and about to throw a harpoon.

There are three funerary beds found, the finest of them is completely covered by gold. The holders of the bed shaped in cow image with long horns holding the sun disk in between