Egypt has been through a lot of periods and eras with different cultures, traditions and religions. If you looked on the overall Egyptian history, you will find that Egypt started with the pharaonic dynasties that created Hieroglyphic language, one of the oldest recorded languages ever, date back for about 3400 B.C. the hieroglyphic language developed through the long Egyptian history and took many form. However, hieroglyphic survived and remain spoken until the 17th A.D century in the form of Coptic. After Amr bin Al Aas took over Egypt and the Islamic conquest spread all over Egypt, Arabic language became used in daily life instead of Coptic.

There are so many ancient languages around the world. Some of them survived and remain spoken and some developed into other forms. However, it is hard to find B.C ancient languages are spoken now. The language families help us to find the origin of each language.

The ancient Egyptian language belongs to the Afro-asiatic language family which has over 300 languages were spoken in North Africa and West Asia thousands of years. Since Egyptians speak Arabic now, makes the current spoken Egyptian descended from Semitic linguistics which is a branch of the Afro-asiatic family as well. The Semitic linguistics originally a fusion of the Arabic linguistics and emerged with of the Arabian Peninsula language. Before Arabic becomes the official language in the republic of Egypt, common people used to speak demotic followed by Coptic. These two language phases are a form of developed ancient hieroglyphic emerged with Christian church language. 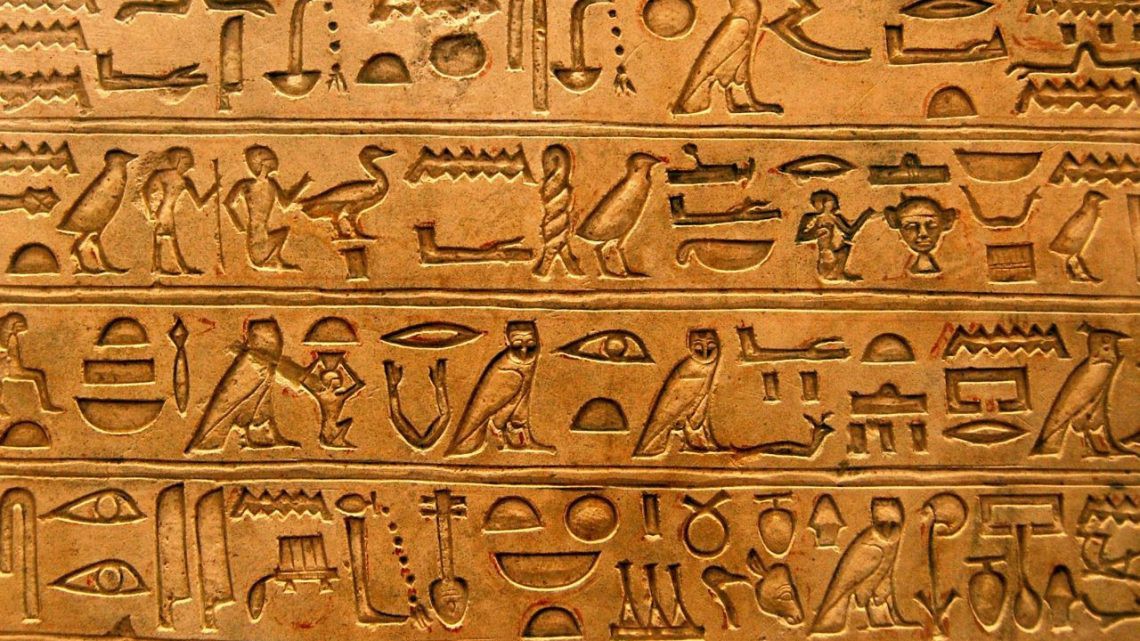 Millions around the world were visiting the marvelous monuments of ancient Egyptians. Everyone was amazed by the pyramids, temple and tombs, but they were very disappointed by the inscriptions and signs of which nobody could read or understand it. Many scholars and archaeologists tried to analyze the hieroglyphic signs by the imposing scenes on the wall of the temples and pharaonic royal necropolises; unfortunately all of their effort was useless. The list of the hieroglyphic letters were in scripted on the walls of Isis temple 1300 years ago, on Philae island in south Egypt where the young French scholar (Jean Francois Champollion) solved the riddle of the hieroglyphic language.

The hieroglyphic scripts didn’t consist any letters; it comprised symbols and many shapes of animals and objects drawn in rows or columns. These symbols meant more than a regular basic language for ancient Egyptians, it was god's legacy and divine language related to their religious beliefs, and that’s why the symbols were unchanged and remained the same for 3000 years. The signs of the ancient Egyptian language were very complicated, they were carved or painted carefully, but never were written. However, the Egyptians used it despite its difficulty for everyday administrative, literature, daily life, governmental officials and on the walls of their constructions. Ancient Egyptian language went through many different phases. From the first stage of Archaic Egyptian to the last stage of late Egyptian, passing by the old and middle phase.

If you want to visit Isis temple (known also as Philae temple) located in Aswan, the starting point of analyzing hieroglyphics, you can look for  Nile River Cruise that include visits to Aswan city, or you can check out Aswan day tours which travel to Egypt company definitely organizes all of them. The southern cities of Luxor and Aswan are mostly visited by Nile cruises where tourists get to Sail between the pharaonic temples and royal tombs and capture the hieroglyphics texts.

Demotic is on the Egyptian language main phases (7th century B.C to 5th A.D). it is a developed form of ancient Egyptian mixed with a developed form of Hieratic and written in Greek letters. It was rarely used when Roman invaded Egypt and started the Ptolemaic dynasty. The last phase of ancient Egyptian language is Coptic (4th A.D to 14th A.D). Coptic was the language of Orthodox Church in Egypt, it was the last developed form of hieroglyphic merged with Demotic and written with Greek alphabet except for seven letters.  The Coptic survived until 17th century, and some still speak it in the churches of Egypt.

Coptic started to fade away and vanish slowly after the Islamic conquest in 7th century. Egyptians adopted Arabic as their spoken and written language in daily life. by time, it became the language of administration and  spread everywhere. Although, Egyptian Arabic has a different accent from the Arabic spoken in other countries, but still understood very well by other Arabic speakers.

Egypt's languages and accents are many. The southern people of Aswan may use their Nubian language which is used in Sudan as well.  The Nubian language originally descend from Noba nomads and some African tribes settled in the third and second Nile cataracts. Also, there are other minor linguistic groups like the Beja language. The language spoken by inhabitants of Siwa oasis in the western desert of Egypt, their language also known as Bedouin or (bedawi). It is spoken by some Sudanese as well, and classified under North Cushitic linguistic branch . The language has no official recognition, it can be written by both Arabic letters and Latin Eritrea.