Kom ombo temple was built 180 years ago (B.C)by the Ptolemaic dynasty during the Roman invasion, what's so special about the temple of Kom ombo that it stands right on the river bank between Edfu and Aswan which makes it a wonderful stop station for Nile cruises and a main highlight of Aswan attractions .the temple is dedicated to two gods, Sobek the crocodile god and Haroeris (the falcon god Horus), it is weird for any Egyptian temple to be set up for two gods ,it's just unusual to have double dedication. Travel to Egypt agency has already provided Egypt tours that include Kom ombo temple visits. 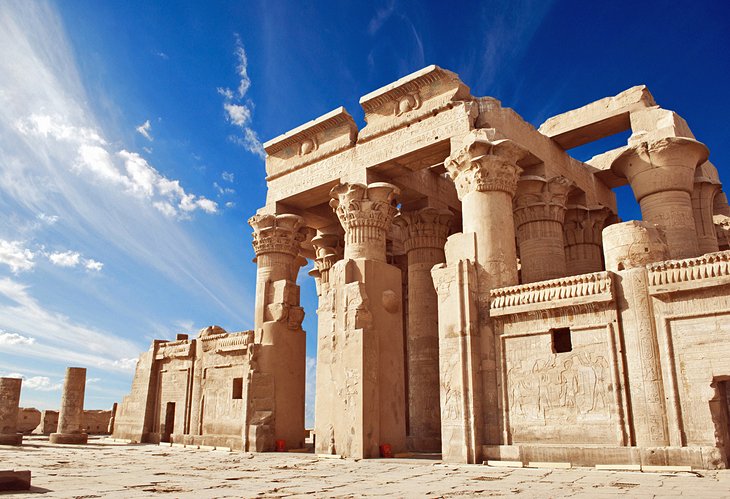 The history of kom ombo temple

Back in time, the temple took place between the Nubian trade routes and the gold mines in the eastern desert, later, it became a training depot for the wild animals used in the war during the role of Ptolemy VII to fight the Seleucid empire, it was built during his reign as well .the area that the temple was constructed on used to be a favorite spot to the crocodiles to lay under the sun on the Nile shore, so it's make sense now to be dedicated to the crocodile god .some renovations were made later, such as the hypostyle hall which was added by Ptolemy the seventh 51-47B.C,Moreover , under the role of emperor Trajan 53-117AD ,the forecourt and outer walls were added.

ancient Egyptian had very special religious believes, they had many gods and goddesses each one indicates some morals motivated the Egyptian to dedicate them worshiping temples ,in Horus and Osiris myth the Egyptian god Seth refers to evil and darkness which somehow changed his skin to be a crocodile in order to escape, the right side building of Kom ombo temple is for Sobek (a form of seth), his wife Hathor and their son (khunso).the Egyptians believed if they worshipped and honored dreadful crocodiles as gods they would protect them from attacks ,However, the left side building of  the temple is set up for Haroeris (form of Horus) and his wife. Roman emperors were so admired and impressed by the Egyptian mythologies ,they recognized well how much the ancient Egyptian were passionate about their gods so they portrayed themselves with Egyptian god figures to win respect and loyalty of common Egyptians . you'll find the Roman emperor Domitian seen on the entrance pylon with the  divine triad Sobek,Hathor and Khonsu beside 52 long lines of hieroglyphic writings , as well as ,emperor Tiberius who is shown on the columns of the temple as he rendering homage and making offerings to the gods . 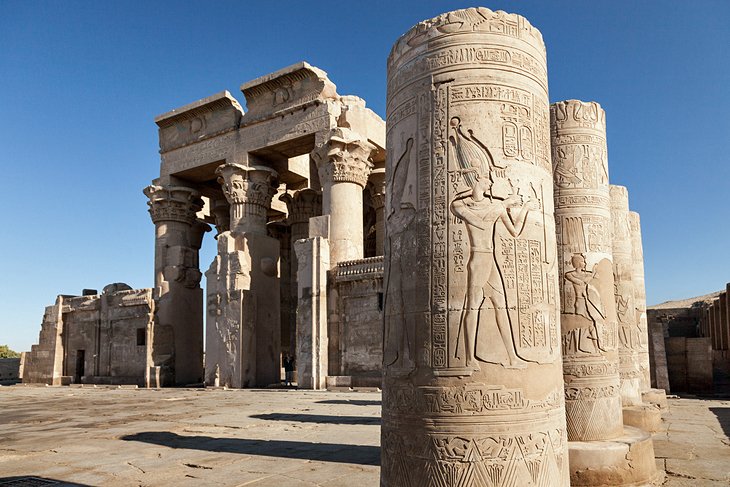 it is a double temple each side dedicated to one god of Sobek and Horus ,the two sanctuaries buildings are perfectly symmetrical ,almost a twin temple ,linking between them similar passageways lead to the outer parts of the temple. Some renovations were made later, such as the hypostyle hall which was added by Ptolemy the seventh 51-47B.C, Moreover, under the role of emperor Trajan 53-117AD, the forecourt and outer walls were added, the entrance gate of the temple complex assumed to be built by Cleopatra's father Ptolemy XII. The walls of the temple painted with repeated offerings scenes to the gods by the pharaohs of the Ptolemaic period, and include Cleopatra VI.

The main feature of kom ombo temple is the hypostyle hall full with fifteen columns decorated with some lotus floral capitals and sun images, the bases of the columns are decorated with Lilly as a symbol for upper Egypt and papyrus which is a symbol for Nile delta, However, the roof is decorated with flying vultures. since the common people were very influenced by religious thoughts, The Egyptian pharaohs linked themselves to gods in order to appear to their folks as chosen kings by deities, so we can see Ptolemy XII painted on the outer and inner walls of the temple purified by Horus and being crowned by Haroeris, other carvings shows him making offerings to the same gods beside Sobek, Isis and lion headed god. There's a large round located west of the outer hypostyle hall called the "sacred wall" which was used to measure the depth of the Nile, also there's a small pool was for raising sacred crocodiles where uncovered crocodile mummies were found nearby.

the inner hall has ten thin columns which has some engravings of Ptolemy II making offerings to the gods while his brother making some offerings to Haroeris at the back of the hall as well. the south wall shows paintings of Sobek , the southwest corner shows Ptolemy II receiving the victory sword from Haroeris in the presence of his wife and sister. Between the back doors there's a hieroglyphic list of the temple's gods and festivals. After the hypostyle halls ,there's three vestibules was decorated by Ptolemy VI, the first one shows Sheshta (god of writing)making some foundation measurements of the temple, the second vestibule were made only for priests with a storing chamber for sacred manuscripts and papyrus while the walls contained some dedications for god Sobek and offerings for Haroeris .

The chapels and the birth house

The small chapels were decorated as well but with un finished bas-reliefs, the survived reliefs of the façade depicts an entire process of surgeries and surgeon's instruments confirming the great medicine skills of the ancient Egyptians .the chapel of god Hathor located on the right of the temple, was constructed by the Roman emperor Domitian dedicated for Hathor whom the Greeks identified as Aphrodite, an ancient Greek goddess associated with love, also some crocodile mummies can be seen in the chapel. The" birth house" also belongs to the temple complex which was built by Ptolemy VIII.

The development of Kom ombo town

Kom ombo is a small town located on the west bank of the Nile between Edfu and Aswan city, it was once a landscape covered with sand and maybe that's why the Arabs called it Kom which means (small mountain) because formerly it was desert and sandy hills before the excavations and that the distinct feature of the town (kom ombo temple ) stands on a small hill overlooking the Nile. today, thanks to the irrigation, agriculture and sugar cane plantations which extended to cover almost 12,000 hectares, this industrial movement led to developments to all the villages of Kom ombo making it industrial centers, in addition of hospitals, schools, sugar refiners were established all over. The stones of Kom ombo temple actually differ from any other temple, and what makes the temple really stands out is the exceptional background of the fertile land, direct view of the Nile and the granite rocks on the shore.