It is a shame not to take care of 7000 years old civilization of ancient Egypt. It has to be organized in chronological sequence and displayed in most fascinating way ever. The Egyptian tourism ministry took on its shoulder the burden of designing high standard museum in order to showcase more than 100,000 artifacts, 3500 of them belong to the young king Tutankhamen, and that's why an architectural  competition been set in Japan 2002 which was under the supervision of UNESCO and the UIA. The huge legacy of pharaonic heritage is divided all over different sites and need to be shown in one place. Different eras of ancient Egypt monuments and diverse antiques from the ancient kingdom periods will be presented within a single building which aims to emphasize the inherited art from our ancestors. Since art was a denominator of the multiple eras and periods, Egypt has been through, the museum mission is to document and conserve these masterpieces in a place that could be as a reference to our history for visitor from all over the world. Travel to Egypt will make sure to include a visit to the grand Egyptian museum in most of Egypt Tours and Cairo layover tours once it opens. So, stay tuned. 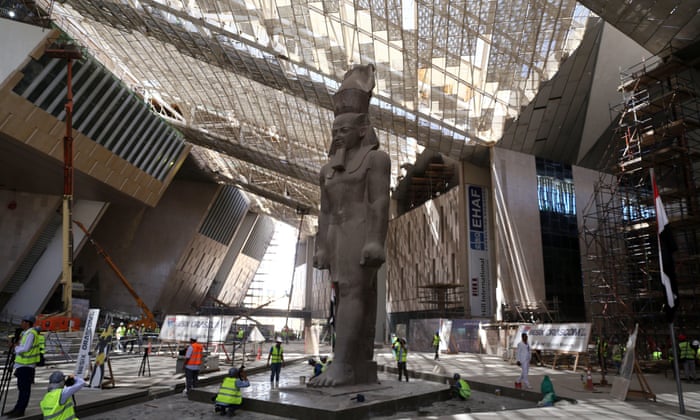 When the grand Egyptian museum opening is about to happen, it will be the biggest historical center committed to one single civilization. The structure will be standing only 2 kilometers away from the three pyramids of Giza, and will house apportion of Egypt's most valuable relics and antiques. It is expected that the landmark can receive 5000,000 visitors annually. The grand Egyptian museum took more than a decade to get in shape and cost more than one billion $. The 5.2 million foot square museum will open in 2020. Authorities said that the soft opening probably will be in January, and the rest of the place will be done and ready to attract guests in July. These dates are not accurate, but we are waiting anyway for this huge building to finally open the doors for us. Sources been revealed that the conservation center of the museum has received more than 46,000 artifacts to be refurbished before being displayed at the opening. Also the organic lab has received the boy king Tutankhamen treasures for restoration, and for the first time, the full collection of king Tut will be displayed at one place since the tomb was discover in 1922. 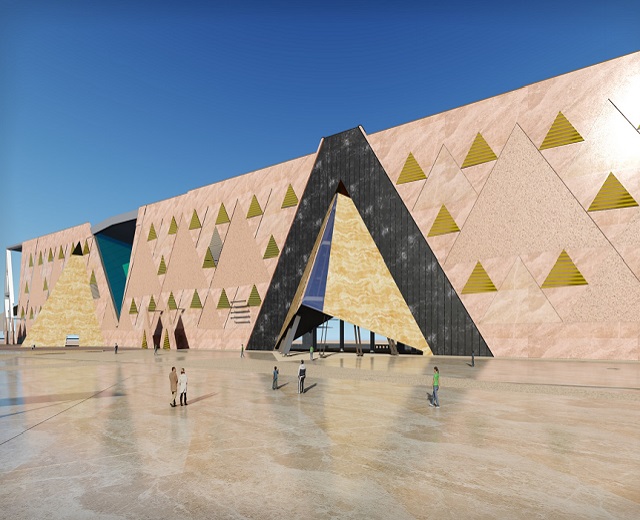 Since one third of the pharaoh's antiques displayed at the Egyptian museum in down town Cairo, most of   Cairo day tours include a visit to the old museum. Now, all of the objects will be transferred to the new   Egyptian museum in Giza city with a future vision to be connected directly with the three pyramids site to decrease the traffic and make it easier for the tourists to visit both sites without spending too much time. It will be like an amazing huge gallery for the ancient Egyptian civilization. Of course this future plan will take a lot of effort and time to get in process, but it was confirmed from authorized sources that the linkage between the two sites might be done two years after the official opening. The museum is designed to be spacious enough to host the huge collection. It will have parks, gardens, cafes and restaurants. The conservation center will be the heart of the entire museum, equipped with fire stations and energy center. The conservation center will be one of its kind in the whole Middle East, divided into five laborites. The museum also will have entrance courtyard and conference center. The designer made sure to increase green landscape between the parking areas and high quality restaurants. There will be temple Garden, roof garden, Nile park, land of Egypt park and dunal park.