Luxor city is the hosting home for most of the pharaonic Egyptian monuments. The city with its two banks are enrich with history and legacy that date back to thousands of years. Luxor was the chosen city by ancient Egyptian kings to be the capital during the middle and new kingdom, and to be settle of their temples, tombs commemorating statues. among them is the colossi of Memnon which is located on the west bank, and belongs to king Amenhoteb III from the 18th dynasty. 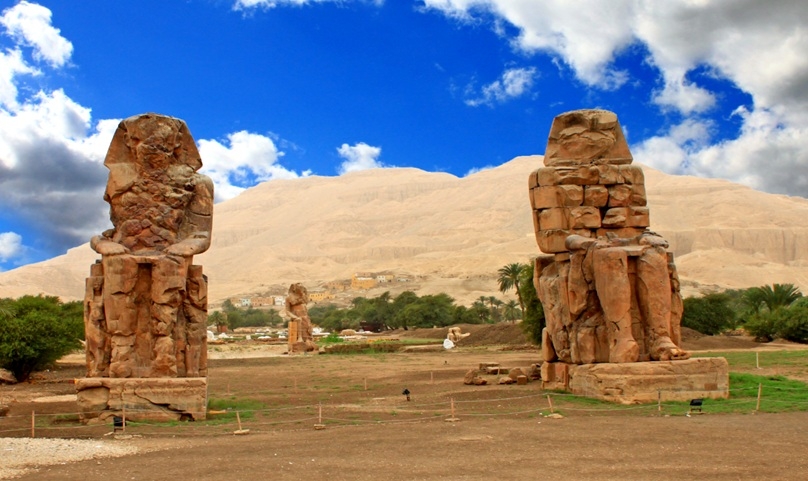 The first attraction to be encounter in Luxor west bank is the colossi of Memnon which was built as a guardian to the funerary temple of king Amenhoteb III. The mortuary is now vanished and has no left sing of it but tiny rock cracks. The colossai twin statues are still standing to welcome the visitors until our day. The origin of the name Memnon comes from the Greeks when they visited the site. They were impressed and amazed by the design of the statues, and identified them with the Greek hero Memnon son of Aroura, an ancient Greek goddess.

The shape of the colossi

Each of The royal features is 18 meters high, 270 tons weights and carved out of sandstone. The giant statues represent king Amenhoteb III seating on his throne and his hand are on his hip, while his mother Mutemuia and his wife Tiy are represented in smaller statues standing beside the king. On the back, there are hieroglyphic texts of the names and titles with some decoration.

Travel to Egypt agency has already provided Luxor day tours and packages that include a visit to Luxor west bank, so you can see the colossi of Memnon. Also, you can check Nile river cruise packages which in each package, you will cruise between the two banks of Luxor city.

The function of the colossi

The destroyed mortuary of Amenhoteb III, which was built in Antiquity, was once behind the two guardians statues of Memnon. Architects wanted to make a majestic entrance for the mortuary temple of Amenhoteb by sculpting two massive statues, each one of a single rock. Earthquakes, Floods and daily life practices led to the ruin of the temple construction. Also, the reuse of the temple's stones as resource materials for building other monuments was a factor of the complex destruction and disappearance. However, the colossai are still serving their function by introducing king Amenhoteb and the mortuary ruins behind them in a fascinating way.