The city of Luxor is located in the south of Egypt on the east bank of the river with 450,000 population, there's some families belong to the dynasties of the pharaohs living in Luxor until this day, most of the citizens work at farming especially (sugar cane farming ), artworks, stone and metalwork beside the touristic traffic of the city, it has dry warm climate in winter, very hot days in summer and rarely if you saw falling rain or cloudy weather .the city of Luxor similar to an open air museum captures the heart of anyone steps the land and walks around its great obelisks. 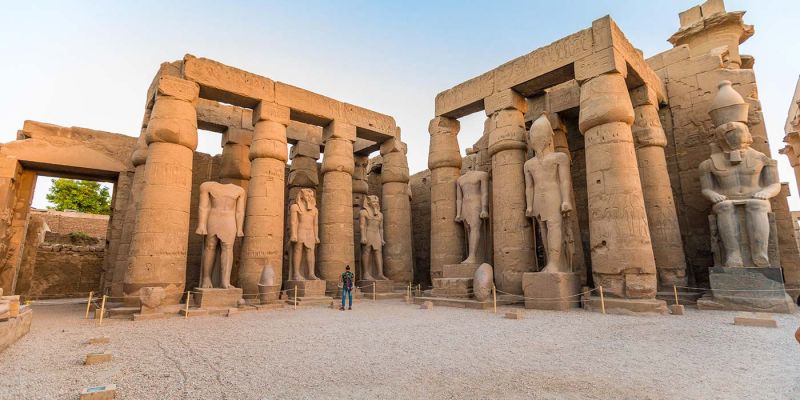 the city of Luxor was the administrative capital for upper Egypt during the sixth dynasty 3000,2100 B.C. and when the country was invaded by the heksus the upper and a lower country were united and the royal court was moved to Luxor for over four centuries. Luxor is one of the main cities included in all categories like Egypt tours and Egypt budget tours

Luxor is considered knowledge and a leaning beacon for the human race from the pharaohs culture to the Islamic civil passing by the Greek, roman and Coptic eras, the first Egyptian called it "waste" as a symbol for ruling empowerment then came the Muslims scientists and scholars who were amazed by its architect structures and named it "Luxor" which is plural for "places" in Arabic, and even before Arab the Greek poet Homerus mentioned the city in his famous Iliad as "Thebes" and described it as the city of brightening gold and a hundred gates.

Luxor is among the ancient pharaohs capitals during the new and middle kingdom and was dedicated for god Amon Raa so the old Egyptian look after the city and built the temples and tombs of selective heavy stone in order to last for eternity unlike the regular houses of common people was built of normal stone which absolutely make sense how the houses and pharaohs palaces were vanished by time but the temples stood until our day .the city of Luxor consist of the west bank and the east bank, ancient Egyptian believed that and the east shore of the Nile is for living and worshipping where they built great temples but the west is for the afterlife where they constructed tombs and underground grave like the valley of the kings  and queens.

The city also known as "the mother of culture" maybe because it contains 1\3 antiques and monuments of the world , Luxor remained a small village during the Islamic era and no one looks after the temples and monuments until it became a whole ruin, then came champion (French scientist ) along with French forces , this man was charmed by the magnificent city and was able to discover how the hieroglyphic signs were written and read, since that moment all the eyes were directed to the city and the government started to focus to protect it is monuments from pollution and random urbanization, now the city has its own domestic airport and safaja harbour destines from south of Cairo about 650 km and in 2017 Luxor was chosen as the capital of Arabic culture for its huge rule in tourism and the economy. 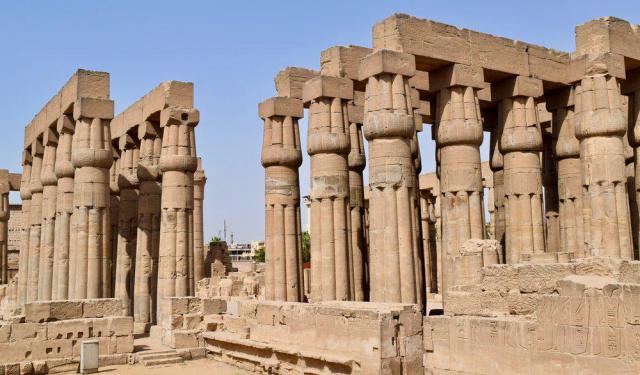 Luxor almost has 14 temples among them Luxor temple which was built by king Ramsess the second beside the Karnak temple, in general, there are two kinds of temples: funeral temples and worshipping temples, Luxor temple was originally dedicated to Amon god of the sun, Mut goddess of war and Khonsu the moon god

When you enter the temple, you'll pass through huge gate decorated by the scenes of the king Ramses the second and his military triumph at Kadesh battle , besides the gate there were six massive statues of king Ramses, four standing and two seated. then you'll find inside two courtyards one for the king Ramses and the other for the king Amenhotep the third, the yard is full of huge black granite statues of the king Amenhotep, also there were a pair of pink granite obelisks one of them was taken to stand in de la Concorde square in France,  the courtyard leads to a colonnade built by Amenhotep ||| and later decorated by Tutankhamon and seti the first, next to the colonnade there were two statues for king Tutankhamon but some Egyptologists say that they belong to Ramses ||. Luxor temple also three chambers each one dedicated to one of the three gods.