between all ancient Egyptian marvelous structures and historical objects, the pyramids have the most lasting and most effective impression. Pyramids were made in the sake of burying their owner's insides the inner chambers. Common Egyptian people and their rulers (pharaohs) believed that the man will be resurrected again with all of his possessions and treasures he owned in Life, and that's why pharaoh's built themselves pyramids and tombs to proceed their afterlife journey. Many books were written about the pyramids and how they were constructed perfectly by ordinary people in a time of technology limitation that did not qualify a building to survive thousands of years through harsh manufactures. The pyramids are the main feature of Egypt and the identification of ancient Egyptian civilization in general. According to this, you can rarely find any Egypt tours or Cairo day tours that don't include a visit to the three Pyramids, Sakkara or Dahshur. Maybe the most popular are the three massive great pyramids of Giza, but there also marvelous pyramids structures that worth visiting like the two pyramids of Dahshur. We are here to shed the light on Dahshur pyramids and provide you some really good details in case you are visiting Egypt soon, and want to know more about its top attractions. If you are first time traveler to Egypt, it is better to let travel agency to organize your trip rather than going by your own. Also, you should know that you have the option of customizing your own  specific package. Either ways, travel to Egypt Company has provided both.  trip, or choosing a

Dahshur desert is located on the west bank of the Nile, south of Cairo city. The area is considered as royal necropolis for the Egyptian royal family, and consists mainly of two pyramids; the bent pyramid and the red pyramid. The bent pyramid of Dahshur was built by the first King of the 4th dynasty Sneferu, and it was the first attempt to build a smooth pyramid instead of stepped one. Maybe that's why the pyramid is taking an angle of inclinations from the half way up (54) degrees to (43) degrees. The second pyramid was the first successful try for building classical pyramid shape without no false or inclinations. It was called as the red pyramid for having red ink writings of king Sneferu name on the facing rocks.  The red pyramid has three funeral chambers and inside the third one of is a rare architectural masterpiece where the roof stones create gradual overhang.

The bent pyramid of Sneferu 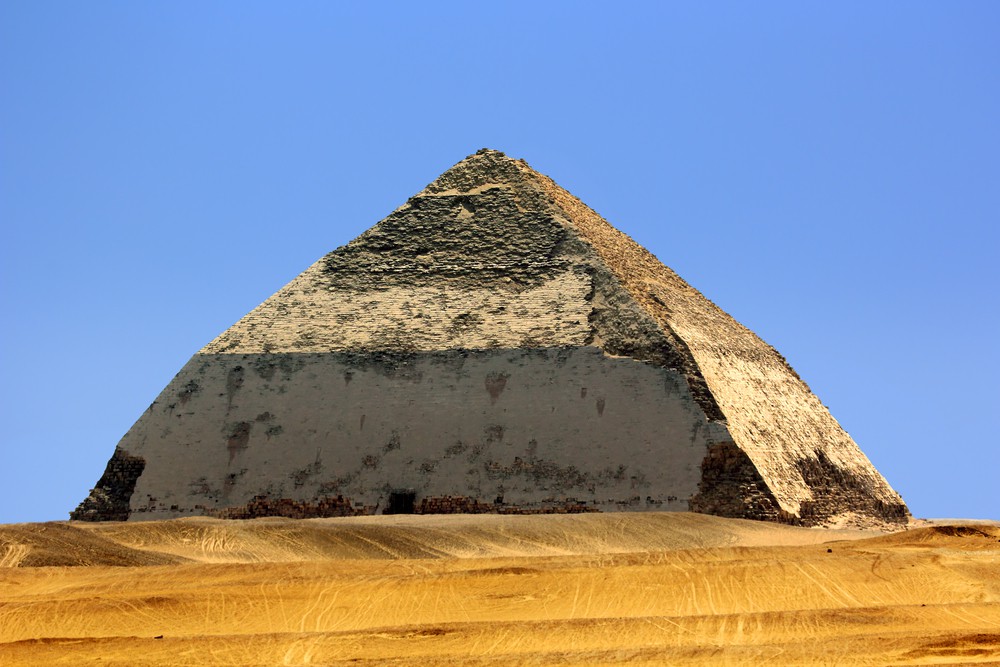 The bent pyramid of Sneferu is the southern one and was built first. During the construction, the architect made a huge mistake, and didn't realize it until the pyramid reached 48 Meter high, which led them to complete the pyramid with an inclination instead of being a smooth service. The south bent pyramid of dahshur was made of limestone, and has an entrance on the southern face, but on 1951, scientists discovered another entrance on the western side. The surrounding area of the pyramid host other pharaonic structures like the small temple of one shrine and small subsidiary pyramid that was discovered in 1947.

The red pyramid of Dahshur

King Senefru built himself another pyramid located 2km away from the first one. This time, the architect took his previous mistakes into considerations and started the pyramid 43 degrees from the beginning to avoid any inclination like the bent pyramid. In fact, this was the first perfect pyramid with straight sides that was ever made and the guiding line for those who came after Senefru to build straight and smooth surface pyramids like the three pyramids of Giza. This pyramid is known as the red pyramid of dahshur because its inner burial chamber was made of rosette limestones. On the northern side of the pyramid, there is an entrance that leads to the inner chamber connected by a second chamber with a passageway. At the end of the second chamber, there is a way that leads to the burial chamber, and by all, we can see that is pyramid has three small chambers with high walls, probably of the same size.